About a month ago it was time for me to head out East of Denver in search of Sunflower fields to photograph.  Due to drought earlier in the year, the fields were not nearly as amazing as they usually are, and all of the old ones I had found in the past were not planted as Sunflowers this year.  Finally I came upon a Sunflower field at dusk.

Once I had shot all of the Sunflowers I could, I focused my attention on capturing some unique photos of the Denver International Airport with Sunflowers in the foreground. 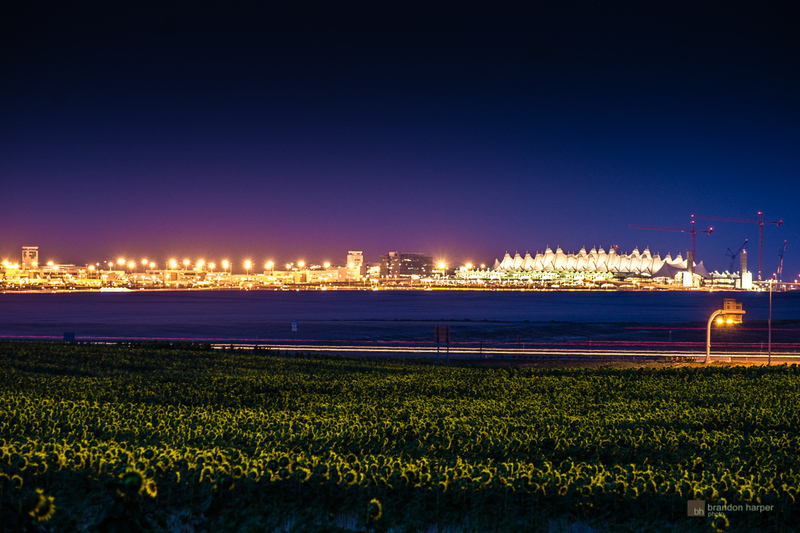 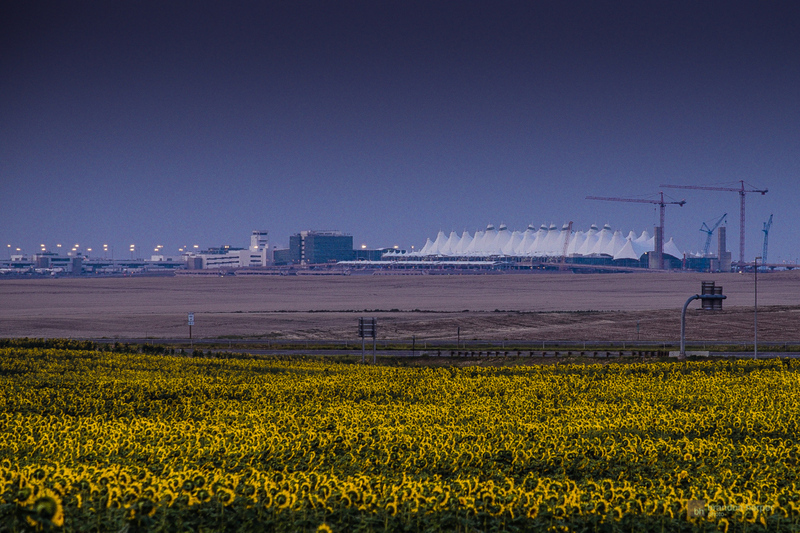 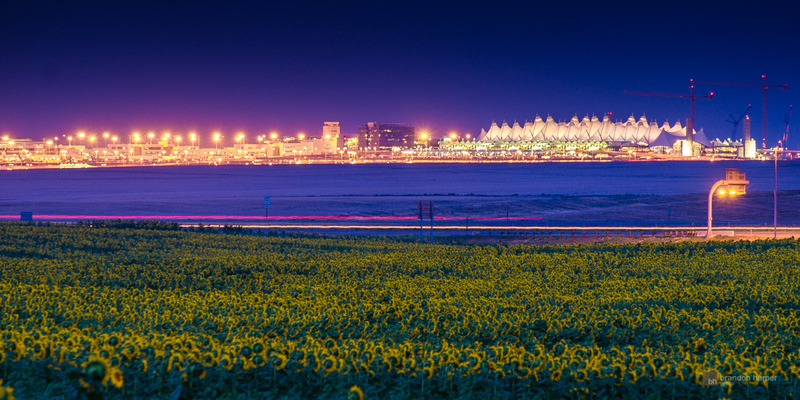 This past weekend I took to the streets of Denver by taking the CPAC Denver In The Dark Photography workshop led by Christopher James.  I mostly took this class to see Christopher's work as he has some really great stuff taken during a very transformative time in Denver's history, as well as to get some ideas from him.  But most importantly, I really wanted to put my Fuji X-E1 to a test and see how it fared for night photography.

If you haven't read any of the other posts on my photo blog, you need to know that I'm about three weeks into owning a Fuji X-E1 which I may use to replace my Canon 5D Mark II.  I primarily shoot pictures of "things", such as Landscapes, Urban Scenes, Architecture, Cars for the most part, but also shoot the occasional portrait and family photos as well for both family and friends. In general I want to move to the X-E1 to take more photos as its much more portable and low-key than the Canon 5D.

Anyhow, now that we've got that out of the way, lets see the photos!  The technical details of how I took these will follow the images at the bottom of the post.  All of these photos were taken with either the Fuji 14mm XF, or Fuji 35mm XF. 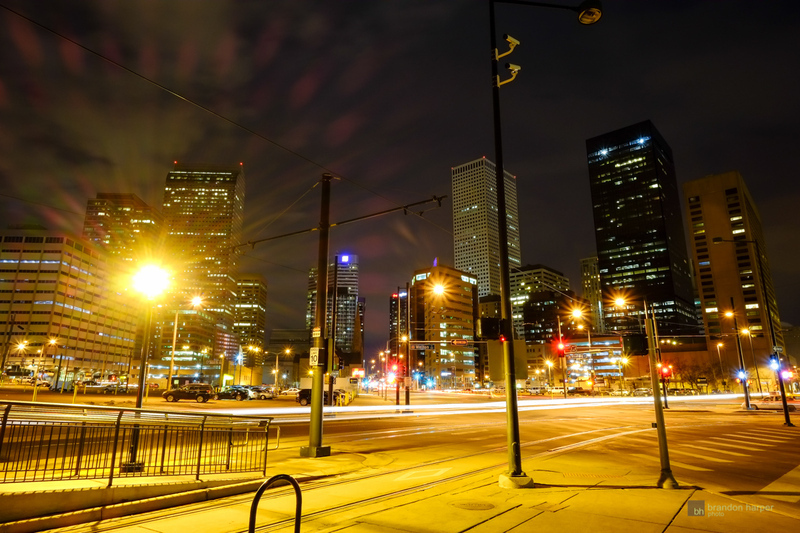 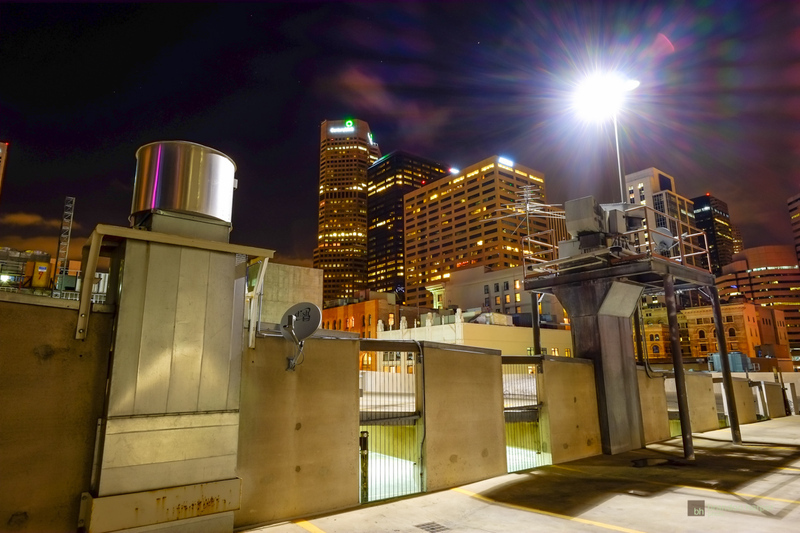 The above two photos are a good test of the dynamic range of the camera sensor, as well as how the 14mm lens handles lens flare. 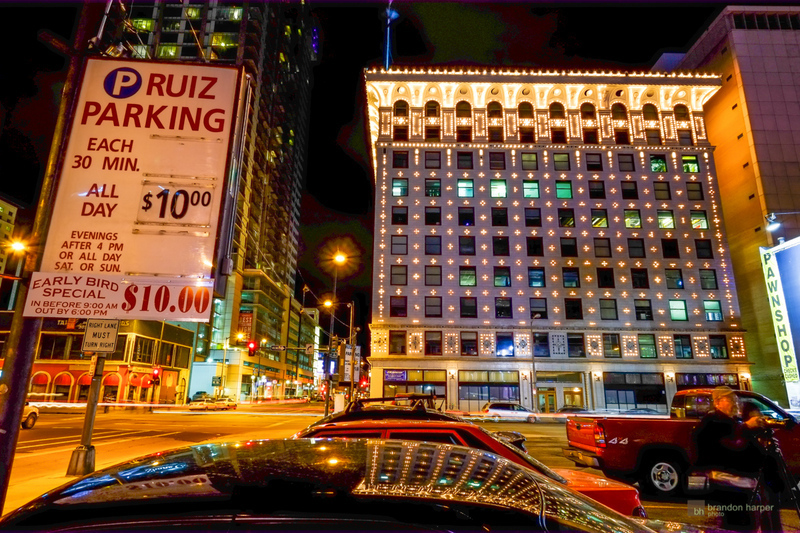 This one is probably my favorite of the city photos.. it just has a lot going on between the building with lights, the reflection off of the car, the light trails from nearby traffic, etc. 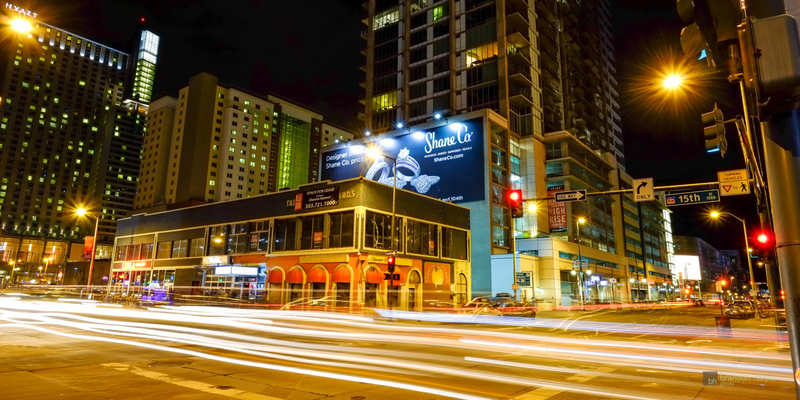 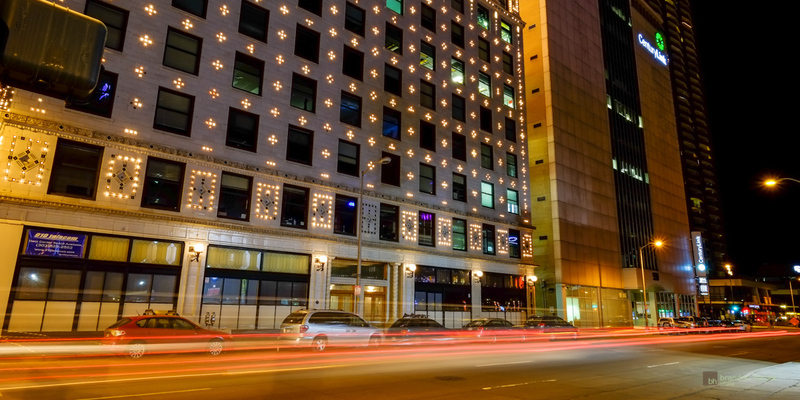 A couple more traffic/intersection photos.  I can't resist the light trails of a busy road... 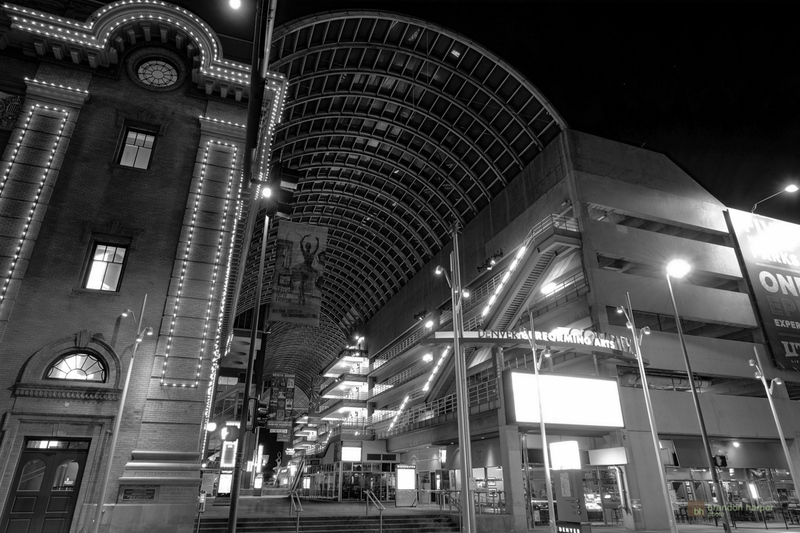 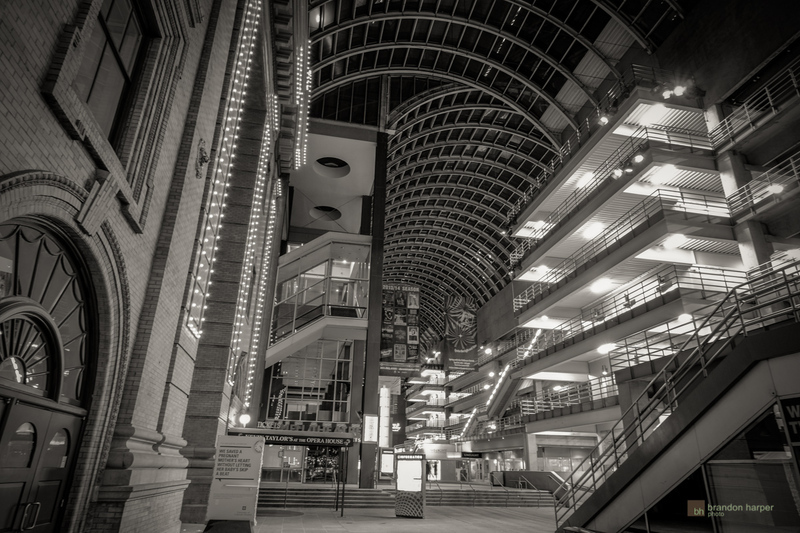 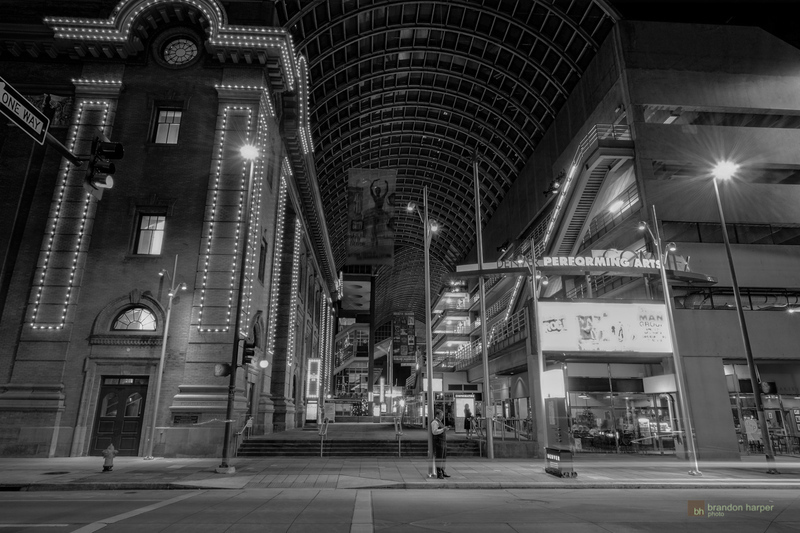 Various architectural photos of the Denver Center of Performing Arts.  I converted these to Black and White images in Lightroom as they didn't do much for me as color photos. 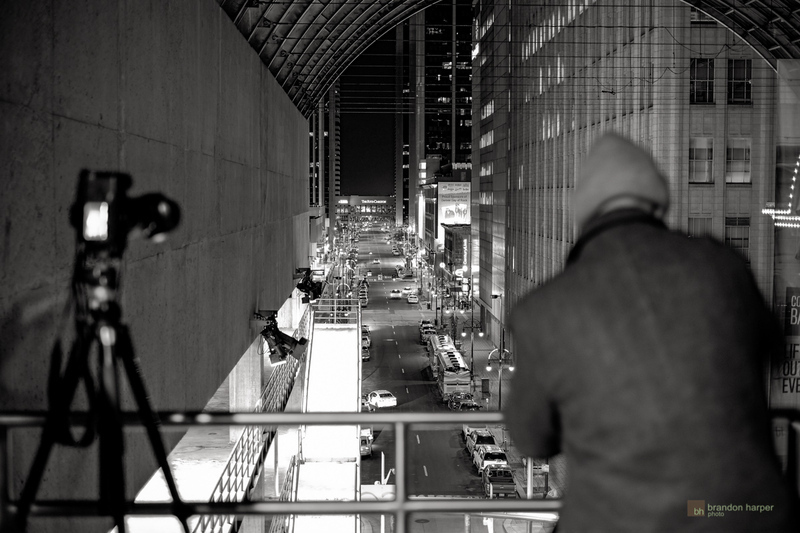 A "behind the scenes" type photo with instructor Chris James in the foreground.  Taken with the 35mm XF lens. 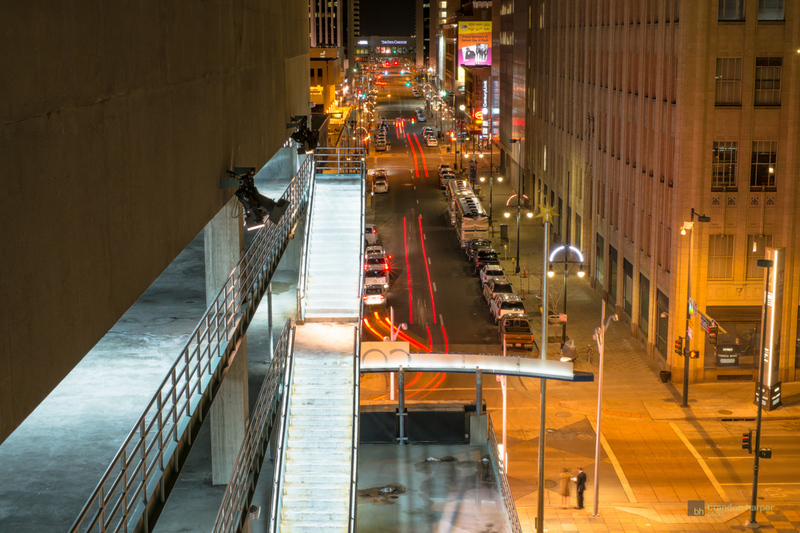 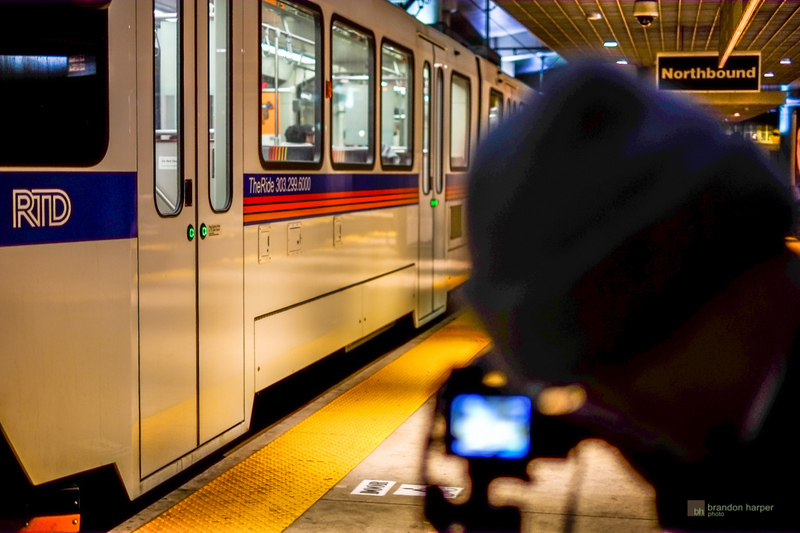 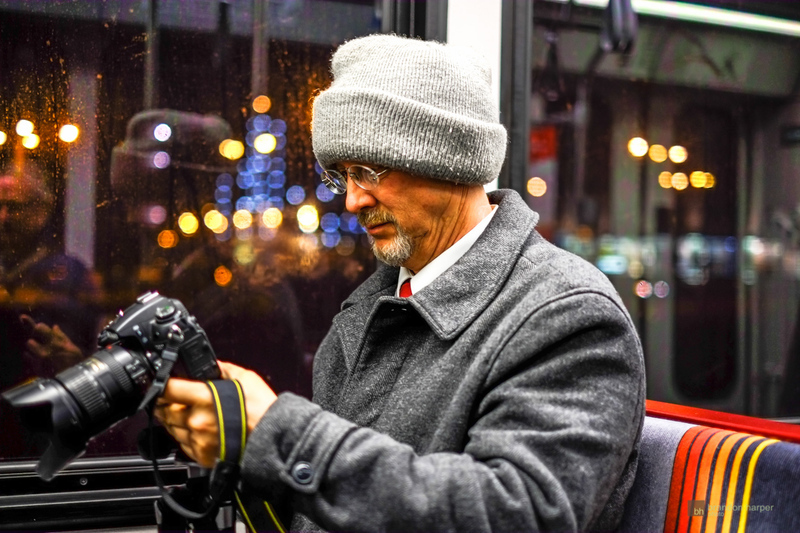 A couple of last shots taken handheld with the Fuji 35mm while waiting for our train to arrive.  What a great lens!

Pertinent settings for most of these photos:

Additional settings for the handheld photos:

Overall, I came away VERY impressed with how the Fuji lenses and sensor performed when used for night photography.  The accuracy of the auto white balance in the X-E1 is simply in a category of its own.  The combination of Fuji lenses and its sensor produce amazingly colorful and sharp photos that to me are quite impressive.  Most night photos in color don't do much for me but these blew me away in color.

I would not hesitate to recommend the Fujifilm X-E1 and 14mm & 35mm lenses for night photography.

Check out the rest of my photography at bharperphoto.com
Browse the Archive »